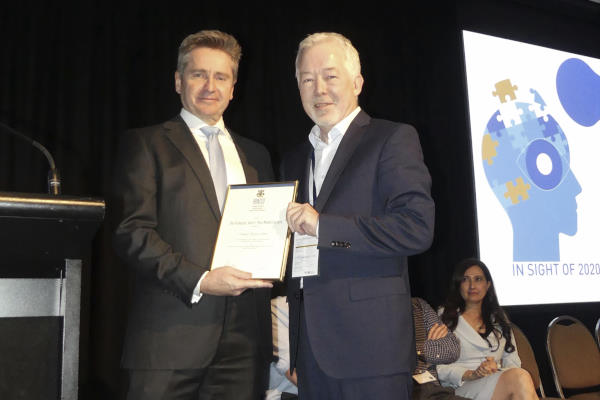 The medal lectures recognise clinical, academic, teaching or other achievements in ophthalmology at home or abroad, and one international and one national speaker will be chosen each year to deliver the lectures.

The late Professor John Parr taught generations of medical students and ophthalmology trainees as professor of ophthalmology in Otago. He established the course for the part one and two RANZCO examinations in ophthalmic sciences, assisted by Gordon Sanderson, and often butted heads with some of his peers for his now more accepted future-looking views, such as employing optometrists and orthoptists to work more closely with ophthalmologists. He also wrote the well-known text book, Introduction to Ophthalmology, which ran to several editions internationally, and was an avid researcher into retinal circulation.

Professor Charles McGhee introduced Professor Gerard Sutton, Sydney Medical School’s foundation professor of corneal and refractive surgery, as the inaugural John Parr medal lecturer, calling him an honorary Kiwi given his long-term, personal and professional links with New Zealand, including his love of fly fishing with the late, and much-missed, Gordon Sanderson.

“One of the things that John Parr was very famous for was teaching and his text book, and one of the things that Gerard is famous for is his work on the post-graduate refractive surgery diploma and his attendance regularly at the RANZCO training programme in Otago, so there is a strong link and it gives me great pleasure to introduce him,” said Prof McGhee.

Prof Sutton’s inaugural lecture tackled the importance of collaboration over cooperation, providing a fascinating insight into his, sometimes harrowing, work in Cambodia and Myanmar.

Born in 1922, the late Dr Dorothy Potter was made a Commander of the British Empire (CBE) for her many contributions to medicine, especially women’s role in medicine. She published the overlooked work of Professor Ida Mann and fought to ensure the continuity of ophthalmic care for Wairarapa residents when it was threatened. As one former ophthalmologist commented, “Her slight stature was rather deceptive as she was in many respects a fighter.”

Dr Sharp is well-known in New Zealand as one of the country’s foremost retina specialists and founder of Macular Degeneration New Zealand (MDNZ). She was made an Officer of the New Zealand Order of Merit (ONZM) in 2018 for services to ophthalmology.

Dr Sharp’s lecture, Recognising the distinct features of a group of retinal conditions through electrodiagnostic testing to accelerate the diagnostic process, discussed a number of challenging diagnostic cases, and offered several pearls for deciphering tricky electroretinograms and visual evoked potentials. “Accurate diagnosis for these patients can be life changing,” she said.

Thanking RANZCO NZ for the honour, Dr Sharp said Dorothy Potter achieved much in what was largely a man’s world.

With additional reporting from Susanne Bradley